On Wednesday 11th September, the band played in St Margaret’s, a large  12th century church next to Westminster Abbey. 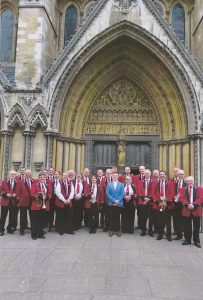 Guest conductor Billy Fletcher led the band through an extended set consisting of a variety of music, from traditional marches through to modern pop .

The fantastic acoustics and the large and extremely appreciative audience made this a very enjoyable day for the band.