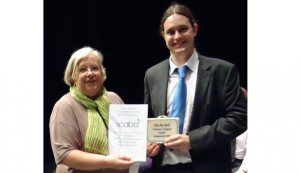 The band entered the scaba Entertainment Contest at the Hawth theatre in Crawley on Sunday 20th May 2012, playing a timed short program including Trumpet Fiesta, Braveheart and Cute.  Robin Langdon, the bands Musical Director won the prize for the best compere, making it the third competition in a row that has seen the band come away with a prize!