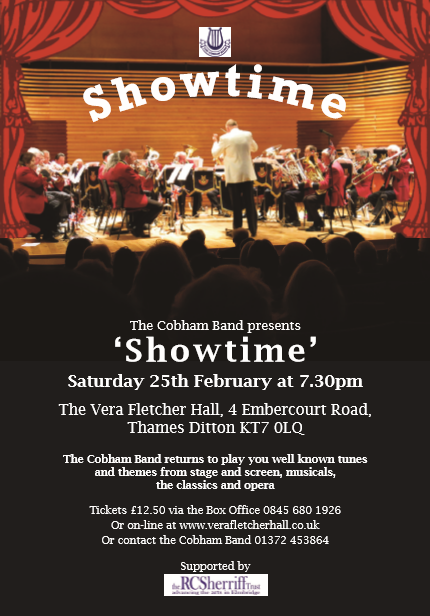 One of our former Musical Directors, David Ruel, kindly returned as guest conductor for a concert in The Vera Fletcher Hall in Thames Ditton on Saturday 25th February.

The theme was Showtime and featured music from stage, film and long-standing artists.  The concert opened with Breezin’ Down Broadway and included Tom Jones in concert, Zorbas Dance, Sullivan Fantasy and Finale from Faust.

A raffle was held during the evening which raised £75 for the Stoke Mandeville National Spinal Charity.

The band played on the slopes of the boat ramp at Hampton Regatta in Thames Ditton on July 21st, and basked in the start of a summer heatwave. The event was almost called off due to heavy rain and dangerous river conditions over the previous few weeks but went ahead after some more seasonal weather. The music included some nautical-themed music such as Anchors Away, Pirates of the Caribbean and Water Music.