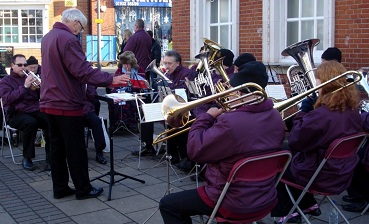 The band had a busy Christmas period, playing a concert and Carols at various locations during December.

A Christmas Concert was held at the Addlestone Community Centre where we played (amongst others) The Snowman, HMS Pinafore, The Christmas Song and All I Want For Christmas Is You.

Carols were also played in Cobham High Street, Brooklands Shopping Centre in Weybridge and at All Saints Church in Ockham. The band collected money while playing carols and a proportion of it will be given our nominated charities, Woking Hospice and Blind in Business.

The band recently gave a donation of over £500 to our nominated charity, The Princess Alice Hospice, based in Esher, Surrey.  The hospice provides patient care free of charge to the local area and also provides support for the families and friends of the patients.  The donation comes from a proportion of the money raised at our Christmas Carolling and Christmas Concert.

In addition to a raffle at the concert,  this year we had a ‘Pick a Carol’ vote – members of the public were asked to vote for their favourite carol by donating money; the carols with the most votes were played.

Each year the band selects a local charity to support at the AGM. 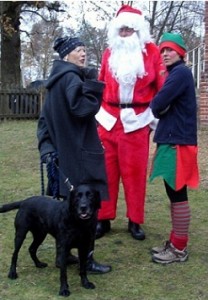 The band had a busy festive season, playing carols in a number of High Streets, at private houses and shopping centres.  Although not as cold as last year, the players wore the band fleece to keep warm.  The number of players at the venues varied from seven to a full band.

A Christmas Concert was also performed, held at the Village Hall in Cobham.  Amongst the music played were Sleigh Ride, A Christmas Festival and Sleep.

The band collected money while playing at the events and a proportion of it will be given to the Princess Alice Hospice, the charity that the band is supporting in 2011. 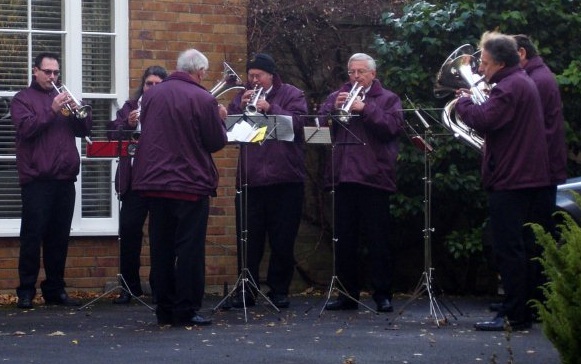 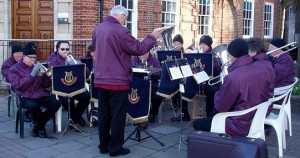